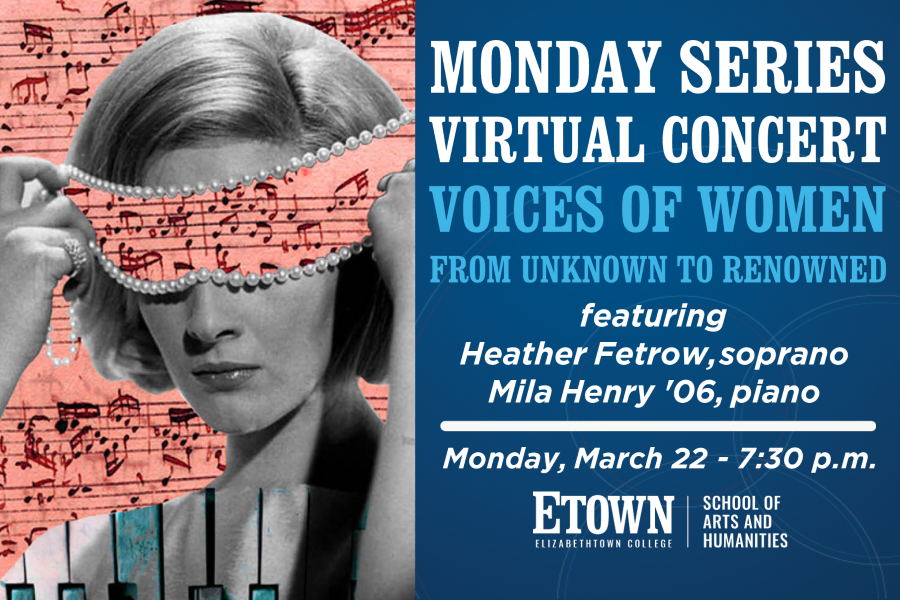 The Elizabethtown College School of Arts and Humanities will host a virtual concert event highlighting the contributions of women throughout music history as a part of their Monday Concert Series on Monday, March 22 at 7:30 p.m.

Voices of Women: From Unknown to Renowned will feature works created by women and about women in recognition of Women’s History Month. The performance will feature soprano Heather Fetrow and pianist Mila Henry ‘06.

Fetrow made her Carnegie Hall debut with Angels Vocal Art chamber orchestra. As an avid recitalist, recent appearances have included Rutgers University Mallery Recital Series, the Church of the Epiphany Recital Series in Washington, D.C. and the Cell Theater Salon Series in New York City. Fetrow is an advocate for women in the arts through her online business, Voices of Women, which profiles and advocates for women composers and artists.

Henry is a music director, pianist, and conductor, as well as Artistic Director of The American Opera Project (AOP). She serves as Head of Music for their Composers & the Voice training program and is also a member of the alt-country band Opera Cowgirls. Mila holds degrees from the Manhattan School of Music and Elizabethtown College. She is delighted to be bringing this program to her alma mater, on the very same Monday Concert Series she attended as a student.

The Voices of Women: From Unknown to Renowned album was released on the Affetto label and was one of Spotify’s “New Classical Albums of Note” in 2018.

The concert is free and open to the public and will be presented on Zoom.