Sock and Buskin to Perform “Proof” as Spring Production 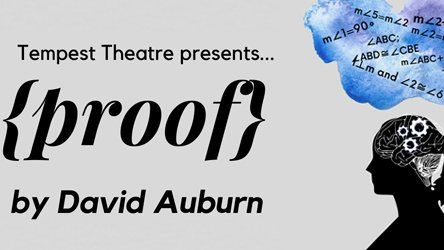 For two weekends only, Elizabethtown College’s theater club Sock and Buskin will present their spring play, Proof, the story of Catherine, daughter of a famous late mathematician, and her struggle to convince those around her of both her mental sanity and her authorship of a revolutionary mathematical proof. Written by David Auburn, Proof won the 2001 Tony Award for Best Play.

The award-winning play was chosen with consideration of Elizabethtown College’s COVID-19 restrictions. The cast features only four performers, who will each be masked for the duration of the play. The small ensemble makes it easier to create stage blocking that keeps actors six feet apart. All intimacy scenes will also be pre-recorded, to prevent the actors from having to unmask more than once. The biggest difference, however, will be the lack of a physical audience. All

performances will be streamed live from the Etown’s Tempest Theatre, with audience members joining virtually. This production is of particular significance to seniors Nicole McCauley and Erin Vago. As the last two remaining members of Etown’s Theater major, Proof serves as their senior project. Vago will direct, and McCauley acts as stage manager.

“Proof has been a show that has been on my bucket list for years,” Vago said. “I love the show, it’s a small cast and it’s not a huge production that requires a bunch of spectacular elements, so it just kind of seemed like the perfect show for our senior project.”

McCauley was excited to have the opportunity to stage a production at all, “I feel lucky to be performing Proof, not only for my senior project, but just in general. We’ve faced so many challenges as we planned this and we continue to face challenges as we go on. Being able to be a part of a production again is a blessing really,” she said.