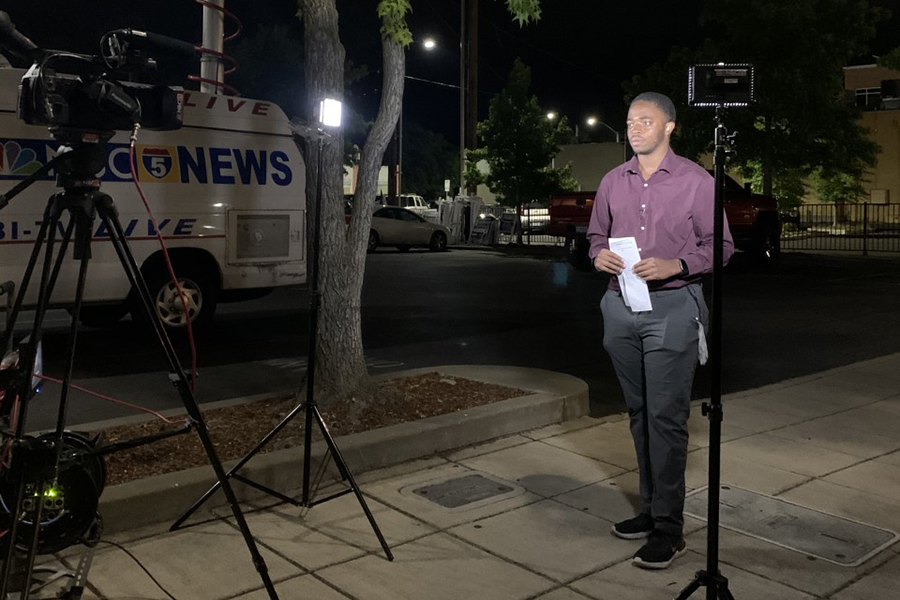 Elizabethtown College communications alumnus Anthony Carter ’19 is now working as a multi-media journalist for NBC5 News in southern Oregon. On a daily basis, Carter is responsible for shooting videos, editing, and writing stories for the station. He credits Etown’s Communication Department for helping him develop the wide range of skills he uses regularly.

After graduating from Etown with a bachelor’s degree in Communications and Media Studies, Carter interned at WGAL in Lancaster, Pa., where he shadowed many of the station’s reporters. He later began applying to stations in every part of the country. When a news director at KDRV in Medford, Ore. mentioned there was a producer position open, Carter applied and was later hired in July 2019.

As a producer, he learned the keys of basic news and was responsible for writing news stories while ensuring that shows were on time. In October of 2020, he left KDRV and joined its competitor in Medford, Ore., KOBI-TV NBC5 News, as a reporter and producer.

Carter says the communication classes he took at Etown prepared him to be successful in the field.

“It truly gave me a head start at my first job because I already knew the basics of editing, writing, and law ethics,” said Carter. “Going to Etown and majoring in communications helped me be more outspoken and learn to utilize tools like the radio station and ECTV, which made it easier to work in any news outlet.”

Carter believes Etown’s Communications Department is especially unique because of the numerous years of experience every professor has in numerous different fields of communications, including news, public relations, video editing, film making, and photography.

“Each professor is great at teaching and is always willing to go out of their way to help students succeed and produce great work for the field they are pursuing,” said Carter.

His advice to current Etown students is to network constantly on social media sites such as LinkedIn and Facebook.

“Remember to always fight for the position you want,” said Carter. “You have to want the job; it’s not going to come to you. If anything, accept a position where you get your foot in the door.”