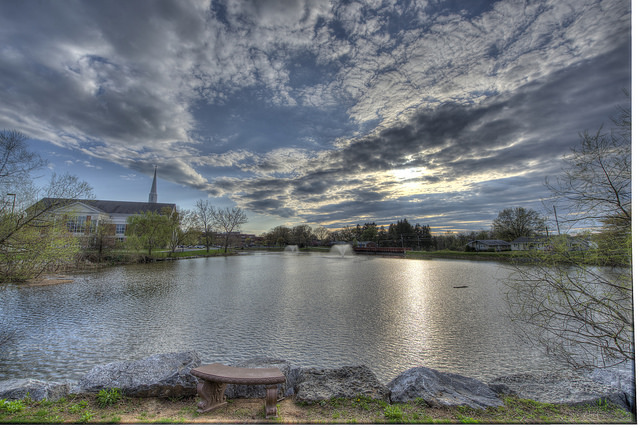 There are two fountains where there once was one; a wide foot bridge traverses a newly fortified dam; and wetland plantings spring up where fresh water tumbles downstream. Choking sediment no longer interferes with aquatics growth, and invasive fish are controlled, allowing healthy fish species and turtles to regain ground.

Government mandated updates to Lake Placida, begun in spring 2012, not only ensured safety for Elizabethtown College neighbors but also gave new life to an iconic body of water suffering under runoff and hostile aquatic populations.

A half a year before, when Tropical Storm Lee produced historic floods, it became evident that failure of the lake’s dam could potentially release 3-million cubic feet of water into the community. A damaging deluge would be certain for proximate neighbors and imminent for those downstream, said Mark Zimmerman, director of Facilities Management. With this in mind, the Pennsylvania Department of Environmental Protection determined that updates, including a $2.5 million, 100-year storm dam, were needed.

The blue gills and crappies were stunted; they were competing for food.”

“The dam was its own project,” said Zimmerman, but when Lake Placida was drawn down, additional work was uncovered. “We actually found a lot of sediment,” Zimmerman said of silt runoff. The excess was removed, bringing the lake to a depth of 10 feet. More in line with what was expected.

Also expected was a bigger population of largemouth bass, and two types of sunfish — blue gills and crappies. “We found only four,” said Zimmerman of the bass population. The lake had been taken over by carp.

The invasive species consumes other fish’s young and hinders spawning, Zimmerman explained. “The blue gills and crappies were stunted; they were competing for food.”

Overall, about 3,500 carp were removed from the lake. Some were as large as 22 inches, weighing 4 or 5 lbs. Students and local residents donned waders and boots and helped corralled the fish up into the creek where they could be collected. The few native species still in the lake, including a handful of channel catfish, were released downstream.

When the water level was brought back up, Lake Placida was stocked with 500 largemouth bass, 1,500 bluegills, 100 channel cats, 60 lbs. of fathead minnows—to serve as food for the new population—and 200 crayfish. The supply hatchery said the fish would likely not spawn the first year, but 16 months later, the population has exploded, said Zimmerman. Unfortunately the invasive fish also are repopulating. Orange and white ornamental koi, cousins of the carp, have been found in the lake.

“We put up signs to educate the public about the natural biodiversity,” Zimmerman said, but there will still be people who don’t understand the damage that can be done by introducing nonnative species to a waterway. “We are trying to get (the invasive fish) before they populate and reverse what good has been done.”

The lake’s turtle population, which quickly returned, either burrowed into the lake bottom when drained, in the case of snapping turtles, or, like the painted turtles, migrated to the “Weird Pond” on the southeast side of campus.

In addition to the sediment and wildlife found in the bottom of the lake was an old rowboat oar lock, said Zimmerman. In the early 1900s, when Lake Placida was first formed by obstructing the nearby creek, it was likely more shallow and wider than today; the road passing by was dirt; and the College had a boat available for students’ and community members’ leisurely paddles. Zimmerman said Facilities has a photo of those days, including the old boat. The oar lock is a perfect match.

Although the College no longer allows boating, due to liability, the Biology Department uses the body of water for study, and community members participate in catch-and-release fishing. “If they catch carp, they are welcome to remove them,” Zimmerman said. “We even kicked around the idea of having a carp fishing derby” to help keep the population in check, he said.

As a summer employee with Special Events and Summer Programs at E-town, Nicole Lorber ’15 passes by the lake several times a day. She has been following the changes and is fond of the appearance. “I love how the new bridge is wider and can accommodate more people,” she said. “The new construction really opens up the area and looks beautiful compared to the old bridge.”

She also pointed out that two fountains seem to match the size of the lake better than one. “I don’t think many students realized that there was a second fountain added,” she said.

The additional fountain not only looks good, it helps with water circulation, said Zimmerman. The agitation in the water helps break up waste from the geese and ducks who have returned twofold to the lake banks.

The increase in the waterfowl population is good and bad, said Zimmerman. The Canada geese and ducks are attractive to see on and around the lake, but they can be aggressive and they foul (no pun intended) the water. The more geese, the more nitrogen introduced into the water.

Also, once the construction was done and the water was reintroduced, Facilities introduced bales of barley to slow algae growth. “As barley decomposes it puts off hydrogen peroxide, which keeps algae down,” Zimmerman noted.

Moving forward, the College will monitor the lake’s water quality, and additional slow-growth aquatics will be planted in and around the water.

“This has been a learning process for me from Day One,” Zimmerman said of the overall construction and rebuild. “And our staff really took to the project, and we had an enthusiastic student crew who worked alongside of us. They all took ownership, a vested interested.”