Elizabethtown College Senior Fellow in the Young Center for Anabaptist and Pietist Studies and Professor of Sociology Emeritus Donald Kraybill recently wrote a book and recorded an accompanying podcast inspired by his nearly four decades spent researching and writing about the Amish community.

Kraybill’s four-episode podcast, “What I Learned from the Amish with Don Kraybill,” will air Tuesdays beginning Oct. 5 on amishteach.buzzsprout.com. His book, “What the Amish Teach Us,” will be released by Johns Hopkins University Press on Tuesday, Oct. 26 and will be available on Amazon.

After giving dozens of presentations on Amish life, Kraybill decided to write his book to answer the question that many have asked him over the years: so, what have they taught you? The book features 22 short essays on a range of topics from spirituality to technology, entrepreneurship, and retirement.

“The essays in this book emerged from conversations with hundreds of Amish people,

thousands of hours of fieldwork in different states, and from my ruminations over the years,” said Kraybill.

His podcast explains how old-fashion practices related to community, technology, apprenticeship, and forgiveness have become relevant again in the 21st century. Each episode ranges from 12-14 minutes and features conversation and input from a friend in the Amish community.

“The Amish have much to teach us,” said Kraybill. “I know it sounds audacious, but it’s true. It may seem strange to turn to America’s most traditional group for lessons about living in a hyper-tech world, especially from a horse-driving people who have resisted “progress” by snubbing cars, high grid power, and even a high school education. Their wisdom confirms that old turns new again.”

Since 1976, Kraybill has authored, co-authored, edited, or co-edited nearly three dozen books, many of which are about the Amish or other Anabaptist groups, but this is the first time he’s recorded a podcast.

“I learned that a good podcast requires hard work and a lot of time,” said Kraybill. “I was extremely fortunate to have Eric Schubert ’23 (a current History and Political Science major) as my podcast producer. He was superb.”

Kraybill hopes his book and podcast gives readers the opportunity to stop and digest the relevant, old-fashioned wisdom of the Amish.

“I hope the podcast and the book encourages readers to see their lives from a new perspective or nudges them to reflect more deeply on the meaning of life,” said Kraybill. “For me, Amish ways disrupt my old habits and my fixed understandings of how I think the world works. I hope the essays prod readers to question what they do and why they do it.” 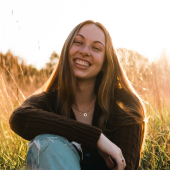 Ally is a junior Public Relations and English: Professional Writing double major from Kingsville, Md. She began working in Elizabethtown College's Office of Marketing and Communications in the spring of 2019 as the Social Media Student Assistant, serving as a contributor to the Etown News site and assisting with content creation for the College's main social media accounts. She is passionate about pursuing a career in the communications field and is especially interested in social media management.